Our Bike Accident Attorneys Know The Laws And Ride Like You

Remember Keating Law Offices When You Hit The Street

If you are ever hurt in an accident in Chicago or anywhere in Illinois, you’ll need a lawyer with the legal knowledge and experience that gets you the best results.

In Chicago and throughout Illinois, pedestrians and bicyclists use our streets and bike paths year-round. As we know, bicyclists and pedestrians are vulnerable out on the street. They are often overlooked by car, bus and truck drivers. Too often, the result is a crash that leaves them seriously hurt. The accident attorneys at Keating Law Offices fight for their rights.

Most Common Types of Bicycle Accidents

A dooring accident or intersection collision can leave bicyclists with serious injuries that have a devastating impact on their lives. Recovery can take months or even years. Some bicyclists are left with permanent injuries. The physical, emotional and financial impact of a crash can be overwhelming for victims and their families. Recovering compensation can be complicated, and insurance companies try to pay as little as possible.

If you’ve been hurt in a bicycle accident, you need a lawyer who is also an experienced bicyclist and knows how dangerous negligent drivers can be. Keating Law Offices, P.C. is dedicated to helping injured bicyclists recover financial compensation so they can get the medical attention they need and the resources they deserve to move on with their lives.

Keating Law Offices’ experienced bicycle accident lawyers have a long record of case results for clients and are considered national leaders in bicycle law. Representing injured cyclists has given us unparalleled experience standing up for people with severe, life-altering injuries. We have the experience to help people injured in any type of accident fight for the justice and fair compensation you deserve.

Our mission is simple: to advocate for people who have been injured or suffered a loss to get the full recourse they are allowed under the law, and to advocate for safety in our city and our state. We love Chicago, we love the people here, and we work hard to advocate for their rights by investigating accidents, dealing with insurance companies, and pursuing justice. 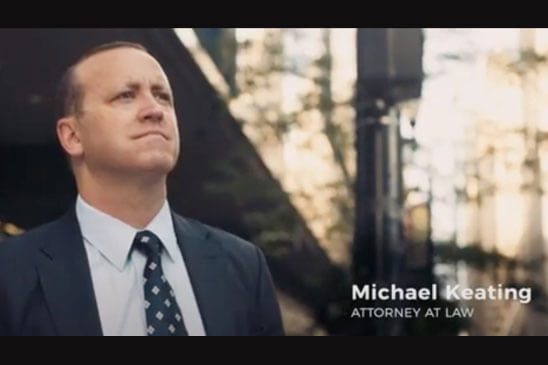 Our case results include many large settlements and verdicts. Our case results also include numerous strong results for individuals who deserve justice regardless of the extent of their injuries. Recovering financial compensation from corporations and insurance companies is a way to help injured people and their families get justice so they can move forward. Whatever the potential value of a case, the attorneys at Keating Law Offices are committed to helping our clients get the best possible outcome.

Don’t spin your wheels. Get Keating.

"I can't say enough about Keating Law Office and the work that Michael and Catelyn did for my family. After my oldest daughter, who was 7 at the time, was hit by a car when she was on her bike and legally crossing, I was extremely emotional and the idea of legal representation did not seem like a priority. However, it was absolutely necessary, am I'm so glad I connected with them. I've never, in my life, hired a lawyer for any reason, but I'm so glad we did. Thank you."

"Best ever! MK and his team made the PI settlement process very easy. I never had to worry about anything and felt taken care of every step of the way."

"Keating thanks for all your help. Best Lawyer ever."

We are bicyclists who are very active in Chicago’s cycling community. We put a lot of miles on our bikes, support bike advocacy groups, and sponsor road bike and cyclocross bike races in Illinois.

Attorney Michael Keating is well known in Illinois as a leading legal authority on cyclists’ rights. He serves as the Chair of the American Association of Justice’s Bicycle Litigation Committee. Mike has been the featured speaker on bicycle law at legal seminars and published articles about bike safety in legal journals. Recognized as a leading authority on bicycle law, Mike has been interviewed on NBC, ABC, FOX and CBS news, as well as in numerous print publications including the Chicago Tribune, Chicago Sun-Times and the Chicago Daily Law Bulletin.

At Keating Law Offices, P.C., we have combined our knowledge of the law and bicycling into a practice that helps injured bicyclists get justice.

In 2015, Dennis Jurs was struck and killed while biking in Hampshire, Illinois. Dennis was 68, an Army veteran who had been injured in the Vietnam War and received the Purple Heart. Dennis was also an avid bicyclist with more than 30 years of experience. The driver who struck him was cited for failing to yield the right of way. A local judge threw the traffic ticket out, ruling that under Illinois law, a bicycle is not a vehicle, and traffic laws did not apply to bicyclists.

Attorney Mike Keating, who represented Dennis’s family, knew something had to be done. He wrote the first draft of a bill that would eventually become Dennis’s Law. He worked with legislators and advocacy groups to push the legislation in Springfield. The bill passed the House and Senate with only one vote opposed, and on August 12, 2016, Governor Bruce Rauner signed the bill into law.

Dennis’s Law clarifies that bicycles are considered “vehicles,” and that bicyclists have the same rights on the road as the drivers of motor vehicles. This law honors the life of Dennis Jurs and helps protect bicyclists in Illinois.

Contact Our Bicycle Accident Lawyers For a Free Consultation

Our lawyers have helped hundreds of injured bicyclists in Chicago and throughout Illinois recover financial compensation for their injuries through negotiated settlements and jury verdicts.

We also help people who have been injured in pedestrian accidents, car crashes and other personal injury accidents. When you’ve been hurt in an accident, experience matters. We have the resources to handle complex cases and know how to get the insurance companies to take your claim seriously.

If you’ve been injured or you’ve lost a member of your family, we are here to help you learn more about how a bicycle accident attorney can help. Contact Keating Law Offices for a free consultation with absolutely no obligation. One of our attorneys can review the details of your case, answer your questions and go over your legal options. We are here to help.