Chicago Bike Lanes Must Be Kept Clear and Safe 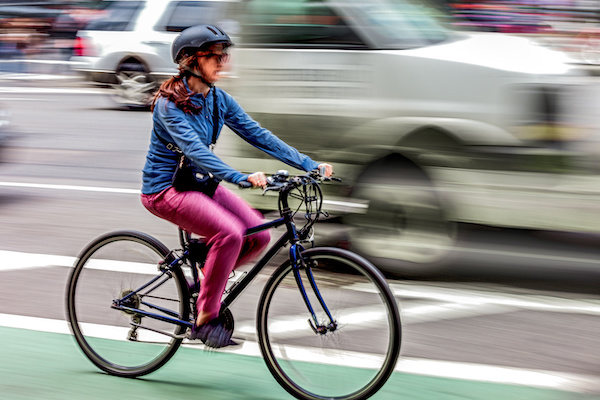 Drivers In Chicago View Bike Lanes as Convenient Locations To Stop, Even Though It Is Illegal and Puts Bicyclists At Risk.

From the very beginning of Chicago's installation of bike lanes in the city, the goal was to increase safety for cyclists. The thought was that by giving bicyclists their own path on the street, in theory separate from cars and trucks, that this would increase safety. However, as Chicago's cyclists have seen, as long as there is only a stripe of paint between the lanes for motor vehicles and the bike lanes, scofflaw motorists will drive on the bike lane or use it as their own personal parking location.

On November 9, members of the advocacy group Bike Lane Uprising posted two photos on social media. One showed the mayoral SUV parked on North Avenue in the bike lane outside Roeser’s Bakery. The other showed Mayor Lightfoot inside the bakery, waiting in line.

The mayor reportedly later chastised security personnel for parking in the lane. But a Chicago Sun-Times editorial notes she should never have allowed the vehicle to obstruct the lane at all, and the mayor acting like she had no idea her detail blocked the bike lane when she got out of and into the SUV strains credulity.

An Illegal and Dangerous Behavior That Can Be Deadly

Parking in bike lanes is dangerous and can lead to serious and fatal collisions. Many were reminded of a crash earlier this year that killed Elizabeth “Lily” Grace Shambrook. She was riding in a carrier attached to her mother’s bike. Her mother tried to ride around an illegally parked ComEd truck parked in the bike lane when an approaching semi-truck struck her.

But the Lightfoot administration blocked those efforts, Vasquez told the Chicago Sun-Times.

“I have concerns about how seriously this administration is taking infrastructure and transportation, knowing we have more cyclists,” he said. “And it’s really not the best to send a signal to Chicago that they should, `Do as I say, not as I do.’”

Retiring Transportation Committee Chairman Howard Brookins (21st) said Lightfoot could have had her bodyguards drop her off at the bakery, then circle around the block to pick her up.

He noted that the Chicago Department of Transportation generally agreed with the crackdown proposed by Vasquez but had some objections to the language in the proposal. Nevertheless, he said he was still intent on moving the proposal forward.

In June, the department said it would add concrete barriers to protected bike lanes by the end of next year. But it notes there are more than 400 miles of bike lanes, greenways, trails, and other bikeways throughout the city, and not all are protected.
That’s why drivers need to take some responsibility to help keep bike lanes safe.

It Is Illegal To Drive On The Bike Lane In Chicago

If You’ve Been Injured, Call For A Free Consultation

“To encourage more cyclists to take to the streets, drivers must stop treating bike lakes as handy spots to park, load or idle, even for a short time,” the Chicago Sun-Times noted.

At Keating Law Offices, we agree. Bicyclists are vulnerable out on the street and are too often overlooked by drivers. A bicycle accident can leave them with serious injuries or even lead to fatalities.

If you were hurt in a Chicago bicycle accident, it’s important to get legal advice as soon as possible. Contact us online to schedule a free consultation, or call us at 833-CALL-KLO. We have dedicated office staff and live operators who can take your call 24/7. Our experienced bicycle accident lawyers are here to help.