Beware of crash dangers, even in protected bike lanes 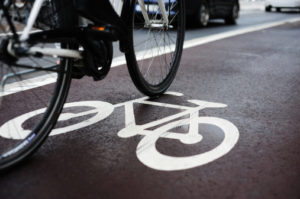 Thousands of Chicago residents get around by bicycle, both commuting to work and cycling recreationally, and more people recognize the health, environmental, and economic benefits of cycling. Unlike motorists, bicyclists are at a greater risk of sustaining serious or life-threatening injuries in a crash, however.

Bicyclists only account for about two percent of all traffic deaths in the United States. With the growing popularity of cycling, the number of fatalities has risen by 25 percent since 2010, according to the Insurance Institute for Highway Safety (IIHS).

How safe are protected bicycle lanes?

Bike lanes offer some degree of safety to bicyclists and they are everywhere in Chicago. A new IIHS study, however, has identified the infrastructural risks that often put bicyclists in danger — even in protected bike lanes.

The IIHS teamed up with researchers from George Washington University, Oregon Health and Science University, and New York University.

The study — which involved 604 adult bicyclists — interviewed subjects who had been to the emergency room after a crash or fall. Researchers then located the point where a crash or fall occurred and compared it with a randomly selected point along a bicycle route.

The study found that vehicles were involved in only about half of all bicycle crashes or falls. In comparison to major roads without bicycle infrastructure:

At street level, bicyclists face the risk of encountering cars turning in/out of driveways and alleys. In addition, pedestrians are likely to enter street-level bike lanes, causing bicyclists to swerve and potentially collide with oncoming traffic. Many bicyclist fatalities occur in such situations.

"There is evidence that protected bike lanes help prevent the worst crashes," said Jessica Cicchino, IIHS vice president for research and lead author of the study. "What our study shows is that certain locations are better than others for this type of infrastructure."

What can Chicago do to make cycling safer?

While these infrastructural improvements may help make cycling in Chicago safer, it's still up to drivers to pay attention. Motorists must look both ways and ensure the coast is clear before turning at an intersection or pulling in or out of a driveway.

If you're a bicyclist who was injured by a negligent or reckless driver, you have rights that must be upheld. The attorneys at Keating Law Offices, P.C. are dedicated to helping injured bicyclists in Chicago maximize their compensation and hold at-fault drivers accountable. We have seen the devastation a bicycle crash can cause. We know the dangers bicyclists face each day on Chicago streets because we are bicyclists.

Don't hesitate to set up your free consultation with us today. Contact us online to learn more.