Chicago's 'highway-like' streets are a threat to us all 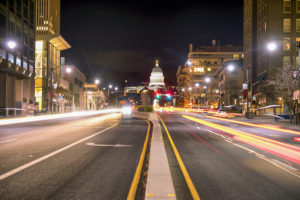 Walking or riding a bicycle in Chicago should be a healthy and safe activity, but on highway-like streets in River North, pedestrians and cyclists are facing a real threat. Over the span of just two days in September, two people on foot were hit by cars within a few blocks of each other, according to StreetsBlog Chicago. They both died shortly after getting run down.

The report raises questions. Should Chicago consider adding more pedestrian- and cyclist-friendly features in River North? Should drivers slow down and be more mindful of others sharing the road?

Section 5/11-1002(e) of the Illinois Vehicle Code makes it clear that motor vehicles, as a matter of law, must stop when pedestrians are using crosswalks:

“Whenever stop signs or flashing red signals are in place at an intersection or at a plainly marked crosswalk between intersections, drivers shall yield right-of-way to pedestrians as set forth in Section 11-904 of this Chapter.”

Although laws are in place to protect pedestrians from the dangers of cars, pedestrians and bicyclists are still frequently involved in accidents.

As personal injury attorneys who have represented injury victims, we know the answer to both questions is “yes.” The first crash involving the pedestrians happened on a stretch of Ohio Street connecting the Kennedy Expressway to the Magnificent Mile shopping district. Ohio Street is a wide, four-lane design that essentially invites drivers to go too fast. The driver who struck the pedestrian never stopped to render aid.

In the second crash, a pregnant woman was struck at the busy intersection of Grand Avenue and LaSalle Street. Both she and her child died as a result of being run over and trapped underneath the vehicle. Authorities are investigating the incident and considering citations against the driver, including failure to yield, according to WLS.

LaSalle is another dangerous road for pedestrians, a six-lane road where it’s not unusual for cars to exceed the speed limit.

Here are some alarming statistics cited by StreetsBlog:

What can be done to keep pedestrians and bicyclists safe?

Safety begins with the drivers. They need to slow down, stay sober and alert, and be aware that others may be sharing the road with them.

Section 5/11-1002(a) of the Illinois Vehicle Code addresses pedestrians’ right-of-way at crosswalks:

Section 5/11-903 of the Illinois Vehicle Code further expands on a drivers’ duty to completely stop at crosswalks:

Unfortunately, these laws are still frequently broken. Injuries and damages seen in crosswalk accidents can be massive.

City transportation officials and law enforcement certainly are aware of the problem of these highway-like streets in Chicago. Some residents have suggested improving signal phases to protect pedestrians who cross the street from being hit by a turning car. Officials will need to take a serious look at any and all proposals to protect pedestrians and cyclists.

Crashes happen without warning. Pedestrians and cyclists who are injured can face barriers in their attempt to get justice and fairly compensated. Families who lose loved ones may get a lowball offer from insurance companies for at-fault drivers or be told the crash was the victim’s fault.

That’s not fair, and that’s why we fight aggressively for our clients. If you were injured in a pedestrian or bicycle crash in Chicago or lost a loved one, contact Keating Law Offices, P.C., for a free consultation. You can focus on your recovery. We will focus on your claim.