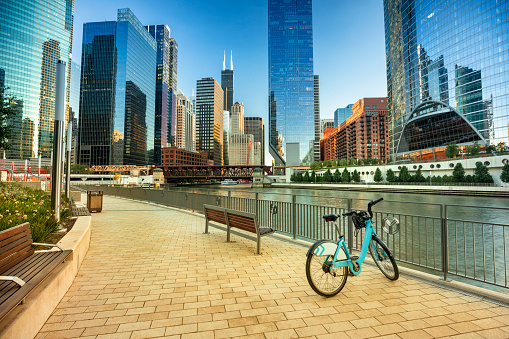 You can see Divvy rideshare bicycles all over Chicago (the city's Divvy program is one of the nation's largest bike share systems), but soon the fleet is going to look a little different.

Operated by rideshare service Lyft, Divvy will soon unveil an updated version of its e-bike. The new model has a sleek modern design and better safety features. The bicycle should need fewer repairs than the current Divvy bikes, require fewer battery swaps, and withstand being on the street year-round, which is no easy feat in Chicago.

Other features of the updated model include:

The first wave of new Lyft e-bikes rolled out in San Francisco in early June. The new bikes are expected to be available in Chicago sometime between the end of July and the start of fall. According to CDOT, the first bikes should arrive on July 29.

The cost to ride a Divvy bike changes depending on what part of the city you are in, the kind of bike you want to ride (electronic or standard), how long you want to ride, and whether you're a paid subscriber. For casual riders, a 30-minute trip costs $3.

Bike Shares Have Grown In Popularity

The popularity of bike shares and e-bikes, in general, has been on the rise for years. Recently, the mode of transportation got a tremendous boost from the COVID-19 pandemic. Hiking, walking and bicycling received renewed interest as people were forced to stay home and seek new forms of exercise, entertainment, and travel. E-bike sales grew by 145% from 2019 to 2020.

Compared to other major cities, Chicago's bike community is one of the most passionate in the U.S., and city transportation officials have made improving bicycle travel a priority. Since 2000, the city has regularly produced plans to improve bicycling opportunities in Chicago.

Mayor Rahm Emanuel says he wants to make Chicago the most bike-friendly city in the U.S.

"The Streets for Cycling Plan 2020" calls for the identification of a 645-mile network of on-street bikeways and provides needed safety upgrades.

Right now, there are about 300 miles of on-street bikeways and 55 miles of off-street trails in Chicago. The city includes more than 12,000 bike racks (more than any other city in America).

Chicago also holds regular 2-hour "Learn to Ride" classes at no cost to participants. You can use a Divvy bike for free during the class and all preregistered adult participants get a free bicycle safety helmet (as long as supplies last).

If You've Been Injured, Keating Law Offices Can Fight For You

You have the right to seek compensation for all expenses that arise from your injury if you were hurt in a crash involving an e-bike or a bike share, but the process is complex, and it's not something you should try to undertake on your own — especially when you're injured and trying to recover.

At Keating Law Offices, P.C., we have a long history of successfully representing injured bicyclists in Chicago, the suburbs, and throughout all of Illinois.

Attorney Michael Keating is widely considered one of the nation's leading legal authorities on cyclists' rights and is the Chair of the American Association of Justice’s Bicycle Litigation Committee.

All of our attorneys share a passion for bicycling and are committed to fighting for the rights of cyclists — especially those who have been injured due to the negligence of others. We also offer legal representation on a contingency fee basis, which means if we don't win your case, you don't pay.

Shift your case into high gear and see what an experienced bike accident attorney can do for you. Contact us today for a free consultation.