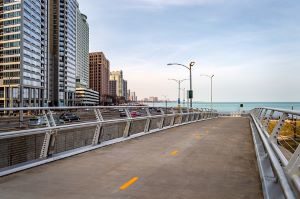 Cycling continues to increase in popularity in Chicago. Unfortunately, Chicago cyclists still face a wide range of dangers not encountered by motorists. Big cities can be especially dangerous for bicyclists, particularly in areas that do not have bike lanes or that are poorly designed.

There is a way cities can reduce the risk of bicycle crashes, according to researchers at the University of Colorado Denver and the University of New Mexico. Studies have consistently shown that adding bike lanes protected by a physical barrier on highly traveled roadways can decrease the likelihood of a collision involving a cyclist and a motorist.

“Protected separated bike facilities was one of our biggest factors associated with lower fatalities and lower injuries for all road users,” study co-author Wesley Marshall, a University of Colorado Denver engineering professor, said in an interview with Streetsblog. “If you’re going out of your way to make your city safe for a broader range of cyclists … we’re finding that it ends up being a safer city for everyone.”

Painted bike lanes may be more dangerous for bicyclists

Professor Marshall’s recent study found that cities with protected, separate travel lanes specifically designated for bicyclists had 44 percent fewer fatalities than cities with bicycle lanes that were not protected from motorized traffic. Researchers involved in the study analyzed 17,000 fatalities and 77,000 serious injuries that occurred between 2000-2012 in Chicago, and several other metropolitan areas.

The same study also helped debunk a longstanding myth about bicycle collisions. For years, some researchers believed that simply increasing the number of cyclists on city streets would decrease the number of bicycle crashes caused by motorists. The recent study conducted by the University of Colorado Denver and the University of New Mexico found that building physical barriers to protect bicycle lanes was the key to protecting cyclists.

In addition, the recent study showed that simply having painted bike lanes that allow bicyclists to share the road with cars did not do enough to adequately protect cyclists. In fact, some researchers believe painted bike lanes give cyclists a false sense of security and are actually worse than having no markings at all.

While we feel that painted bike lanes do have the benefit of warning drivers of the presence of cyclist and providing the physical layout of the legally protected area, it does raise the issue of what more can be done to protect Chicago cyclists riding in the bike lanes.

What makes painted bicycle lanes so dangerous? Some cities allow drivers to park in marked bike lanes, which often forces bicyclists to swerve out into traffic. In addition, collision data clearly shows that protected bicycle lanes are far safer than unprotected bike lanes. Cities that installed physical barriers that separated bicycles from cars (as part of their Vision Zero plans) saw a significantly lower rate of bicyclist fatalities. In Chicago, fatalities dropped by 38.2 percent between 1990-2015.

“When you have them designed like that, even if it’s a protected lane, that might create a more dangerous situation because cyclists are merging in and out of the road versus places with a foot-wide concrete planter,” Professor Marshall said.

Chicago cyclists have rights. Our law firm fights for them

Of course, not all streets in Chicago are equipped with lane barriers. Even when there are protective barriers consisting of bollards, cyclists can still get hurt if a driver veers off the road and crashes through the bollards. When that happens, at-fault drivers must be held accountable for their actions but this can often be harder than many people realize. The Chicago Municipal Code (9-40-060) specifically states that it is illegal in Chicago for a driver to drive on, stop, or stand on a bike lane. That is why it is important to talk to a lawyer as soon as possible after your bicycle crash.

If you or a loved one has been injured in a collision caused by someone else’s negligence, an experienced Chicago bicycle attorney can help you demand justice. At Keating Law Offices, we are highly skilled litigators dedicated to helping injured bicyclists pursue justice and maximize compensation. Our lawyers have years of experience handling complex Chicago bicycle crashes.

In addition, attorney Michael S. Keating helped create “Dennis’s Law,” a state law that protects the rights of cyclists throughout Illinois. For our law firm, fighting for the rights of injured bicyclists is more than just a job. It is our mission. Contact us today to find out how we can help you. We are here to help.