Home > Blog > Share the road with cyclists and pedestrians 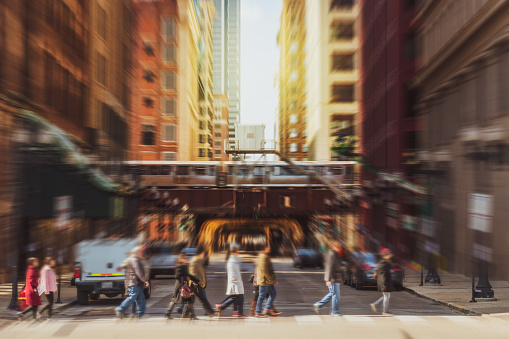 As we begin to put cold weather in our rearview mirror, Chicagoans are being reminded that warmer temps mean more pedestrians and bicyclists will be out and about — and we all need to do our part to "Share the Road" to keep all users of the roadways safe.

There is an old expression that "streets are for people not for cars." This does not mean that motor vehicles should not be on the road, but that all users of the roadways need to keep in mind that there are all kinds of different users of the roadways. At any given time in Chicago, you could encounter a car, a truck, a bicycle, and an electric scooter all at the same time. Each of these types of users of the roadways have different vehicles but a shared responsibility to keep everyone safe and to follow the Illinois rules of the road.

Keep in mind that pedestrians and bicyclists are confronted with different safety challenges than motorists because they are smaller, less visible, and have little to no protection in a crash when compared to those inside an enclosed passenger vehicle equipped with seatbelts and other safety features.

It's also important to realize that people riding bicycles have the same rights as other drivers, and we all need to respect those rights to avoid causing a devastating bicycle crash that results in severe injury and/or death.

Here's what you should know...

Sharing The Road With Bicyclists

The famous German architect who designed Chicago's state government building recently died in an Illinois bicycle crash about 55 miles west of Chicago near the Fox Valley. Helmut Jahn, 81, died on May 8, 2021, in a tragic crash when two vehicles collided with the bicycle he was riding. This tragic event has re-ignited the issues that surround bicycle safety and the Illinois bicycle laws.

Sharing The Road With Pedestrians

Did you know that in 2019 a pedestrian died every 85 minutes in a traffic crash? Across the U.S., more than 6,200 people were killed in pedestrian crashes that year — and it's a problem that continues to plague Chicago and other cities throughout the country.

Combined, there were over 7,000 deaths in 2019 from traffic crashes involving bicycles and pedestrians, which means it's fair to say that collectively we need to do a better job of sharing the road with others.

Unfortunately, there will always be reckless drivers who don't get the message and throw caution to the wind when getting behind the wheel of a motor vehicle.

If you or someone you love got hit by a car in the Chicago area due to a driver's negligence — either as a pedestrian or as a bicyclist — you have recourse under Illinois law to pursue compensation from the at-fault party to cover the cost of your damages.

At Keating Law Offices, P.C., our knowledgeable and experienced lawyers have earned a reputation in Chicago and throughout Illinois as aggressive advocates for injured bicyclists and pedestrians.

In fact, attorney Michael Keating is widely considered the leading authority on bicycle law in Illinois and has been interviewed on many major TV networks and in numerous large newspapers, including the Chicago Tribune, Chicago Sun-Times, and the Chicago Daily Law Bulletin.

Don't let the insurance company for the at-fault driver downplay, dispute, or deny your claim. Let our attorneys handle everything so we can fight for the compensation you need and deserve.

Contact us today for a free consultation. We have two office locations in Chicago and would be honored to speak with you about your potential legal case.