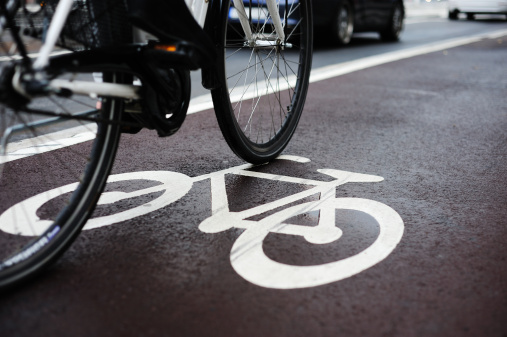 A recent court victory for a Keating Law Offices client showed that the tides are shifting in favor of bicycle safety in Chicago.

The injured cyclist, Guadalupe Cebreros, sustained a concussion, contusions, and other injuries in June 2017 when a passenger opened a car door into the bicycle lane on Washington Street in Chicago. She still lives with the pain of her injuries to this day, more than four years later, and the dooring also permanently changed biking for her. Our $212,976.85 verdict for a dooring in the Washington Street protected bike lane.

“It took away the complete joy I had while riding,” Cebreros said. “I will never have the same joy I once did while feeling completely safe in the green lane.”

Yet the insurance company downplayed the extent of Cebreros' injuries and disputed liability for the crash, claiming that she was biking too quickly and not paying attention. Attorneys Michael Keating and Catelyn Viggiano argued that both parking the car in the bike lane and opening the door into traffic were violations of Chicago and Illinois law.

The laws on these points are clear and are enacted to prevent the exact situation that led to Cebreros’ injuries.

Section 9-40-060 of the Chicago Municipal Code states in pertinent part “The driver of a vehicle shall not drive, stand or park the vehicle upon any on-street path or lane designated by official sign or markings for the use of bicycles, or otherwise drive or place the vehicle in such a manner as to impede bicycle traffic.”

Section 9-30-035 of the Chicago Municipal Code and 625 ILCS 5/11-1407 of Illinois Vehicle Code states that “No person shall open the door of a vehicle on the side available to moving traffic unless and until it is reasonably safe to do and can be done without interfering with the movement of other traffic.”

“The law doesn’t say, ‘Because you have a Lexus SUV, you get to park whenever you want,’” Keating said in his closing statement.

The jury agreed. Our client was awarded $212,976, which was four times the insurance company's "best offer" prior to trial.

The Tides Are Turning, but More Needs To Be Done

This case was a victory not just for one injured cyclist, but also for the entire cycling community. When the jury handed down its verdict, we saw 12 Cook County residents from all walks of life step in to protect cyclists when they get injured in the bike lane. More broadly, the jurors understood that bikes and bike lanes are a big part of Chicago's transportation network, and safety needs to be our top priority.

Still, there is much more to be done to make bicycle accidents a thing of the past. The city of Chicago has added miles of protected bike lanes over the last decades, but "protected" is a relative term. Cerbreros' dooring crash happened in one of those lanes because paint-and-post protection has not proved to be enough to keep dangers out of the bike lanes.

The city needs to improve physical protection for cyclists, enforce parking laws, and make sure motorists and passengers safely share the road with cyclists and pedestrians. And even when police don't press charges, the civil justice system stands as a bulwark for injured cyclists, allowing those who are hurt by the negligence of others to seek justice, accountability, and the financial compensation they need to rebuild their lives.

We're proud of this victory, and we also recognize that it's just one step toward a better, safer future for cyclists and all Chicagoans. If you or someone you know has been hurt in a bicycle crash, we would be honored to listen to your story in a free consultation.