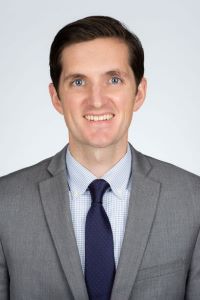 Tom Reuland’s entire career as an attorney has been focused on complex litigation. Tom is known for his dogged investigation and litigation skills he uses to help individuals who have been wronged by the negligence of others. Having obtained favorable verdicts and outcomes through trials, mediations and arbitrations, Tom can be counted on to lead his clients at Keating Law Offices, P.C. through difficult times. He is experienced with the difficult and frequently complex legal process after someone else’s wrongdoing leads to serious and often catastrophic injuries, abuse or neglect.

Tom grew up in Aurora, Illinois, where he attended Marmion Academy and earned several awards for public service, varsity athletics, and through the school’s JROTC program. After graduating from the Ivy League’s Brown University, he worked for a non-profit in New York City that utilized the courts to protect abused and neglected children. Tom returned to the Midwest for law school and graduated from the University of Iowa College of Law. While at Iowa he was honored by being named to key leadership positions. Tom was on the school’s top-ranked Law Review and was on the Executive Board of its Advanced Appellate Advocacy Program.

In 2017 Tom was honored to receive the distinction of being named an Emerging Lawyer by the Leading Lawyers Network. This award is only granted to the top 2 percent of lawyers under the age of forty or practicing less than ten years. Tom has also written legal articles published in the Iowa Law Review, the University of Nebraska’s Digital Commons, and the Construction Law Corner. He has also appeared in Law360, a leading online publication, commenting on trial advocacy skills.

While not in the office or courtroom, Tom is a member of the young professional’s board of a nonprofit that provides legal services to low-income Chicagoans.  He is also on the professionals’ council of a nonprofit focusing on national policy issues impacting people living in poverty. Tom is sincerely committed to the community and he is a member of the American Association for Justice, the Illinois Trial Lawyers Association, the Illinois State Bar Association and the Chicago Bar Association.

Tom lives in Chicago with his wife and son.